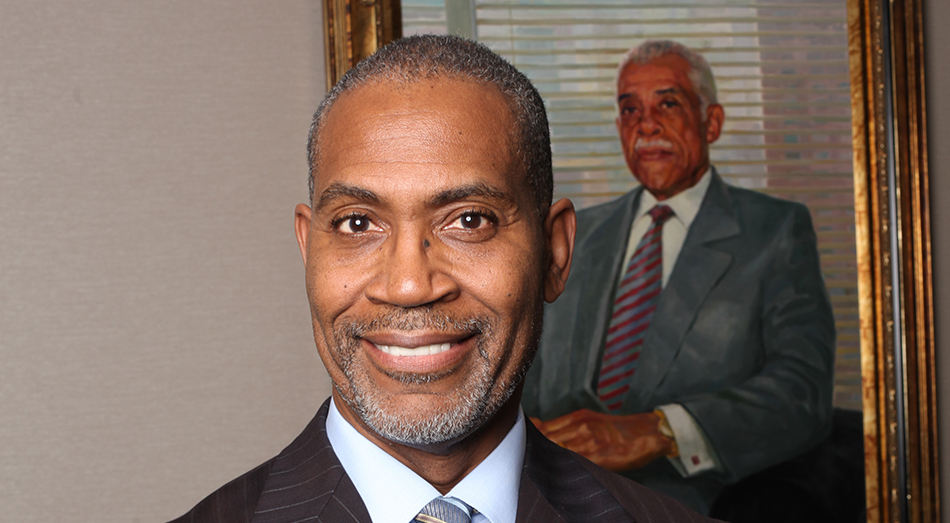 Stanley E. Foster has been with Hollowell Foster & Herring PC since 1985 and became a partner with the firm in 1988. Mr. Foster specializes in general corporate and business law. His practice focuses principally in public finance law as bond counsel, underwriter's counsel or insurer's counsel. 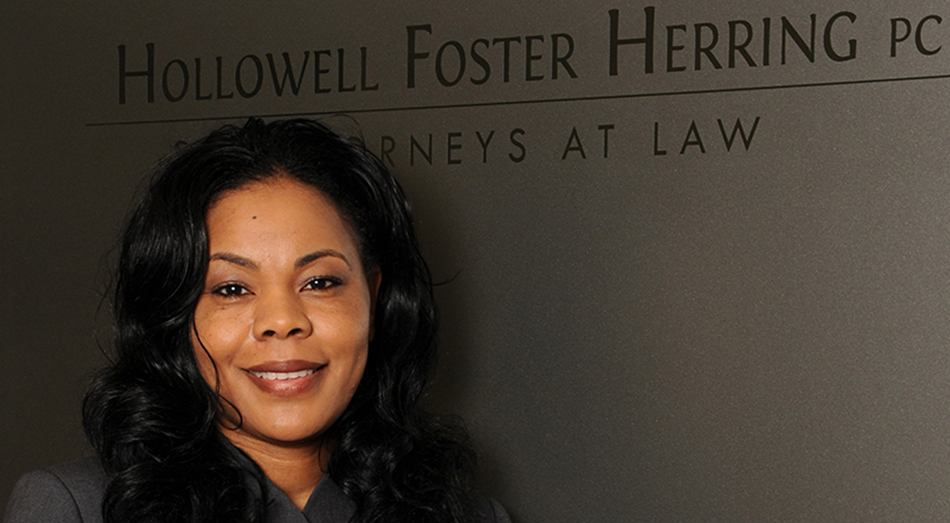 Jolanda Herring is The Project Attorney for the EEO Services Section. She is a principal partner in the firm, and has amassed an impressive portfolio of favorable rulings & successful cases... 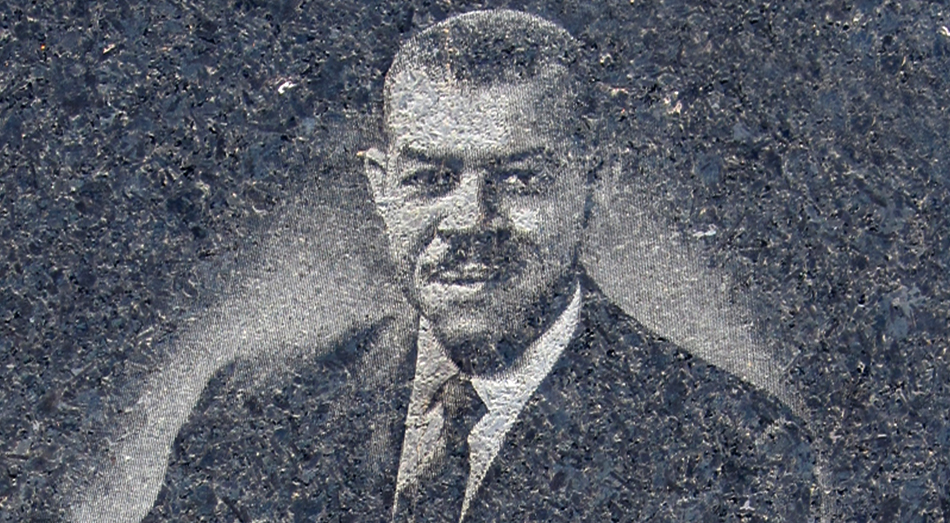 Donald Hollowell was born and raised in Wichita, Kansas, and earned a high school diploma while serving six years in the U.S. Army's 10th Cavalry Regiment (the original Buffalo Soldier regiment). Although in Kansas, Hollowell did not encounter the racist Jim Crow laws of the South, he faced blatant racism and discrimination while serving in the U.S. Army during World War II. Hollowell recounted that "army officials relegated him to eating in the kitchen, sleeping in quarters adjacent to prisoners, and patronizing Jim Crow canteens." Hollowell's experiences with racial segregation and discrimination and his involvement with the Southern Negro Youth Congress after the war inspired him to pursue the study of law to help in the fight for social justice.

In 1952, Hollowell set up a law practice in Atlanta, Georgia, where he began to play a major role in the burgeoning civil rights struggle.

Hollowell became well known for fighting racial segregation in the State of Georgia. Hollowell sued the University of Georgia, charging the institution with racist admission policies. The suit ended in 1961 with a federal court order demanding the admission of two African American students, Charlayne Hunter and Hamilton E. Holmes.

In 1960, Hollowell and co-counsel Horace Ward won a victory in the Georgia Court of Appeals which secured the release of Rev. Dr. Martin Luther King Jr. from the Georgia State Prison. In another case, Hollowell and members of his firm prevented the electrocution of a 15-year-old black youth from Monticello, Georgia, five days before the scheduled execution. Hollowell and civil rights champion C. B. King also defended Dr. King and hundreds of civil rights activists in the historic civil rights campaign in Albany, Georgia known as the Albany Movement.

In 1966, President Lyndon B. Johnson appointed Hollowell as regional director of the Equal Employment Opportunity Commission (EEOC), a government agency that monitors workplace discrimination. This appointment made Hollowell the first black regional director of a major federal agency.[1] Hollowell remained with the EEOC for nearly 20 years. Hollowell also served as president of the Voter Education Project, where he helped increase the number of African-American voters from 3 million to 5.5 million.

In 2002, the University of Georgia awarded Hollowell its honorary Doctor of Laws degree.

To honor him, the City of Atlanta renamed Bankhead Highway (U.S. 78) in his honor; Emory University named a professorship in his honor, as well.

Hollowell was a dedicated member of Kappa Alpha Psi fraternity. In 1968, he received the Fraternity's highest honor, the Laurel Wreath Award, for his work in civil rights. 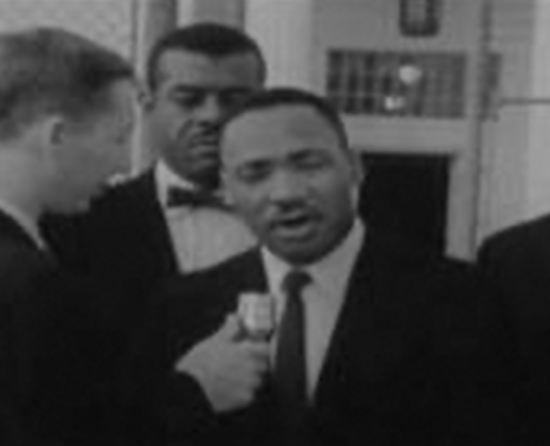 The late Donald Lee Hollowell with Martin Luther King Jr. as King is released from Reidsville Prison in 1960. 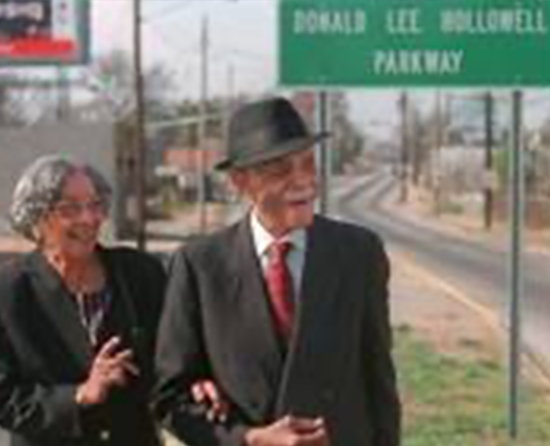 Hollowell the Civil Rights Attorney: In the 1950s and '60s, Hollowell served as one of the lead lawyers in the desegregation of Atlanta schools. He represented Martin Luther King Jr. in 1960 after the civil rights leader was sent to Reidsville Prison on a DeKalb County traffic charge. A year later, he was the attorney for Charlayne Hunter (later Hunter-Gault) and Hamilton Holmes Jr. as they integrated the University of Georgia. Hollowell's firm worked to desegregate Augusta's buses and Macon's schools and won a landmark case requiring Atlanta's Grady Memorial Hospital to admit black doctors and dentists to its staff. In a 2004 interview, former Fulton County Superior Court Judge Marvin Arrington said: "During the movement, in and around 1960 and 1961, when it was hot and heavy, he fought for civil rights, and he did it with a degree of professionalism. He was intelligent and a great advocate."

Hollowell the Buffalo Soldier: Born in Wichita, Kan., on Dec. 19, 1917, Hollowell was told by his janitor father at age 18 that he had to quit school to help make ends meet. He went straight to Fort Leavenworth and enlisted in the Army's all-black 10th Cavalry, the regiment known as the Buffalo Soldiers in the Old West. During his six years in the Army, he earned his high school diploma and, in 1941, enrolled in all-black Lane College in Jackson, Tenn., where he became the starting quarterback on the football team. After the Japanese attacked Pearl Harbor, Hollowell re-enlisted and rose to the rank of captain while serving in Europe. He returned to Lane after the war and earned an undergraduate degree. In 1951 he received his law degree from Loyola University in Chicago.

Hollowell the Parkway: In 1998, to mark his 81st birthday, the Department of Transportation renamed the blighted road originally named for Alabama Congressman John Bankhead. The DOT and members of the Bankhead Business Association figured the new name, Donald Lee Hollowell Parkway, was needed to go along with planned upgrades intended to boost the corridor's image, viability and safety. Hollowell, who had lived near the area for more than a half-century, was seen as the perfect choice: "I'm not a young man anymore and don't have the energy I once had when I was very active as a civil rights lawyer," Hollowell said at the time. "But I will try to do all I can and encourage others to help make this a better community."

Hollowell the Mentor: As a prominent black attorney in Atlanta, Hollowell was a beacon and mentor to a host of young black attorneys, including Arrington, Vernon Jordan and former federal Judge Horace Ward. Jordan, who went on to become an adviser to Presidents Jimmy Carter and Bill Clinton and to lead the National Urban League, started working for Hollowell the weekend after he graduated from law school. "I finished law school the first Friday in June 1960. The Monday morning after I graduated, I went to work for Donald Hollowell for $35 a week," Jordan said. "I was his law clerk and researcher, and I carried his briefcase and I was his right-hand man. He taught me how to be a lawyer, a leader, how to fight injustice. Whatever I have become in the years, I owe it to him in large measure."

Hollowell the Regional Director of the EEOC: In 1966, Hollowell accepted an appointment from President Lyndon Johnson as the first Regional Director of the new Equal Employment Opportunity Commission, which monitors workplace discrimination. Dr. Hollowell remained at the EEOC as a Regional Attorney until 1985 and was later considered a likely candidate for a federal or state judgeship, although no nomination ever came. In 1998, he became a special Fulton County State Court magistrate. "I had a great deal of respect for him, and my only regret is that he was never appointed to the bench," said former Atlanta Mayor Sam Massell. "Dr. Hollowell commanded respect, and that is what made the difference."

A neighborhood park renovation for the City of Atlanta, the plaza includes a Memorial to civil rights lawyer and activist, Donald Lee Hollowell and an interactive fountain/water play area for children. The site is an inviting gathering place for residence of the surrounding neighborhoods, engaging visitors of all ages, and an integral part of community life.

Our mission is to take a genuine interest in our clients, understand their objectives, and provide the best counsel, advocacy, and personal service for our clients that meet or exceed their expectations. We dedicate ourselves to these values. For our clients, we will work hard, provide superior legal services in a timely, effective, and efficient manner, and maintain the highest standards of professional integrity. For our law firm employees, we will foster an enjoyable working environment, based on open communication and mutual respect, and will encourage initiative, innovation, teamwork, and loyalty. For our community, we will continue our long tradition of service and leadership.

We Succeed When You Succeed!

We understand that our clients want to focus on their business, not on negotiating the legal landscape. We are here to minimize that burden by applying our expertise to your most complex and challenging legal matters. We will work closely with you to gain a full understanding of your business and your legal issues, and in full consultation with you, will devise and implement a course of action specifically tailored to your stated goals and consistent with your financial means. You can rest assured that you will always be fully informed of the direction and progress of your matter, and that your matter will be handled by an experienced attorney who is fully committed to your success.

The research & representation that was implemented into our discrimination investigations was superb & thorough! Our company prevailed in each instance.

Are You Ready To Schedule?

WE ARE ALWAYS HERE

We understand that problems and troubles do not only surface during business hours. We respond to calls, emails, and text messages after hours and on weekends, which means that we have experienced attorneys on-call who are always available to help.